Republican Scott Brown, who ran for Senate in New Hampshire in 2014, joked in an interview that people from Vermont or Connecticut who wanted to vote for him should “come over and do same-day registration and say they want to come down and vote.” For many campaigns, however, that suggestion is not a joke but an actual strategy.  For example, the 2012 Obama-Biden presidential campaign encouraged out-of-state New Hampshire college student to register at the polls, telling them that their votes would “count more” in a swing state such as New Hampshire. In a more serious interview, Brown said:

It challenges the integrity of the first-in-the-nation primary state when you have people who may not even live here and just come up to stay in a hotel and claim that they are domiciled here and that they can go vote. They don’t even have an ID and then they show up and fill out an affidavit, which there is very little enforcement on.

Deputy Secretary of State Dave Scanlan said under the current law, a voter could move to New Hampshire the day before an election, establish domicile, vote, and leave the next day.

In large part, you have to rely on the trustworthiness of individuals to do the right thing when you’re voting. We know that doesn’t always happen. 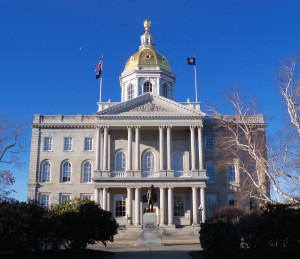 State Representative James Gray argued before the New Hampshire house that public trust in the electoral process had been eroded:

The perception of voter fraud is real in New Hampshire, and this diminishes the importance of voting to our citizens. Indeed, the election law committee heard stories of constituents who did not feel their vote counted for much in their own home towns, their vote being nullified by those they felt were not N. H. residents. We heard stories of campaign workers coming to our state for a few weeks, voting on election day, and leaving for their home states.

Arguing in favor of SB 179 in 2015, State Representative William Gannon also expressed concern about the integrity of New Hampshire’s elections:

Voting is a fundamental right to all Americans, however, if an individual from another state comes and votes in New Hampshire, it cancels out the vote of the state’s true citizens. This is wrong and tears at the fabric that binds us together as New Hampshire’s citizens. . . . This should be a bipartisan bill today. It is a bipartisan issue and I can’t imagine anyone in this Hall wants out of state voters to be free to vote in New Hampshire elections. The bill will protect the sanctity of the voting process here in our state. Residents of my district have approached me stating that they are concerned about the integrity of our state’s elections. Just the fact that they think this weakens our voting system.

17 other states require voters to have been residents for 30 days before being able to vote in elections. All but four states in the United States have various voter residency requirements as well. Not surprisingly, New Hampshire has some of the most lenient voter laws in the nation, making it extremely susceptible to what Secretary Gardner has termed “drive-by voting.” We respect independence and freedom of our citizens, but we have an obligation to protect an individual’s right to vote and the integrity of each vote cast by New Hampshire citizens, too. By adding a 30-day residency requirement, we can still honor our tradition of same day registration, but it requires voters to have some investment in the community they are voting in. We know that elections have consequences and by requiring some level of investment in the community impacted by such elections, is not too much to ask.

I can personally attest that every vote matters in a close election, as my own 2014 state representative contest ended in a tie. I lost one vote in the recount.
The integrity of our process is crucial. Stolen elections cause wars in other countries and massive cynicism in this one. Voter fraud threatens our democracy.
And the Granite State is particularly at risk. Liberal same-day voter registration policies here invite abuse. Over 35,000 voters registered on the last election day. And most of them voted Democrat. Out-of-state college students who voted via absentee ballots in their home states got a second vote in the Granite State. Appalling. . . .
Principled New Hampshire Democrats, like Secretary of State Bill Gardner, have long acknowledged the dangers of such fraud, and our Legislature sought to reestablish voting integrity with SB 179, calling for common sense residency requirements. Sadly, SB 179 was vetoed by Gov. Hassan.