Information regarding voter ID laws: studies, public support, and the need for reform.

Election Integrity in the States

In-depth studies of election procedures in the states and ideas for reform.

Research regarding harmful, new election procedures that have been proposed.
Lawyers Democracy Fund (LDF) is a non-profit organization created to promote social welfare by engaging in activities to promote the role of ethics and legal professionalism in the electoral process. 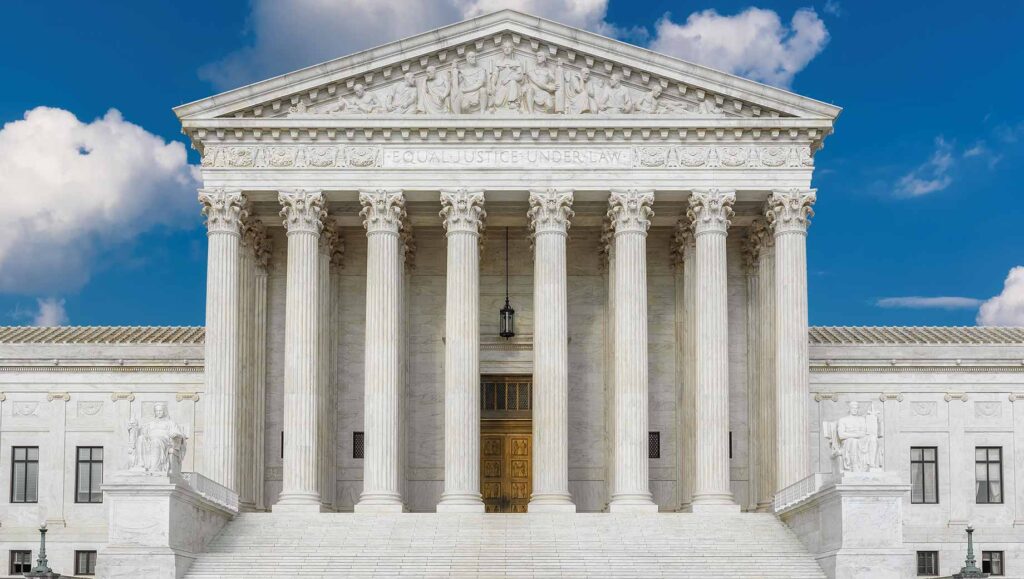 Lawyers Democracy Fund (LDF) filed an amicus brief at the United States Supreme Court in Moore v. Harper, a case that explores the ability of state legislatures to prescribe the times, places, and manners of elections under the Elections Clause of the United States Constitution and what role state judicial branches can play in that process.

The United States Constitution clearly and succinctly states that the “times, places and manner of holding elections for senators and representatives, shall be prescribed in each state by the legislature thereof.” U.S. Const. Art. I, § 4, cl. 1.  While this language has been historically recognized to be an exclusive grant of authority to state legislatures, this case brings forth a simple but complicated question: what role do state judiciaries have in this process?

LDF’s brief took an academic approach to the issue, highlighting the longstanding and exclusive role that state legislatures possess under the Elections Clause to prescribe the rules of elections and how the Elections Clause fails to empower state judicial branches with the authority to nullify the regulations passed by the legislature and replace them with regulations of the state courts’ own devising.

Want to stay up to date about important election integrity issues?

Lawyers Democracy Fund actively tweets to discuss important issues concerning election administration and election integrity.  Be sure to follow LDF on Twitter to stay up to date on important election news – @lawyersdf.

Non-profit org. Mission: to promote the role of ethics and legal professionalism in the electoral process.

In testimony offered at a 1/10 MN House Committee hearing, a DACA recipient said, “We are voting. Our people are voting.” Instead of launching an investigation into this unlawful activity, the SOS's office responded, “noncitizen voting is [not] a problem in MN or nationally.”

The Center for Tech and Civic Life (CTCL) is going for “nothing less than a shadow takeover of election offices.”

Government should be accountable to the people, not the special interests behind the U.S. Alliance for Election Excellence.

A narrative of impending Election Day violence was pushed by the left and its allies in the media throughout 2022, but their hysteria didn’t pan out: “[T]hose who cried wolf must accept the fact that they were entirely wrong.” https://grandcanyontimes.com/stories/638883611-democrats-cried-wolf-over-election-day-violence

Every state in America should reject ranked-choice voting.

LDF serves as a resource for lawyers, journalists, policymakers, courts, and others interested in the electoral process. Therefore, LDF regularly conducts, funds, and publishes research and in-depth analysis regarding the effectiveness of current and proposed election methods, including the decennial redistricting process.

LDF recently filed an amicus curiae brief at the United States Supreme Court in Merrill v. Milligan to advocate for clear standards in the application of the Voting Rights Act in the redistricting process, and LDF is pleased to publish a database of redistricting literature as a resource for those interested in redistricting.

Lawyers Democracy Fund filed an amicus brief at the Delaware Supreme Court in Higgin v. Albence, a case that challenges the Delaware General Assembly’s power under the state constitution to enact universal mail voting without going through the constitutional amendment process.  LDF’s brief laid out for the Court the many reasons why Delaware’s no-excuse mail voting law violated the state Constitution.

On October 7, 2022, the Delaware Supreme Court agreed with LDF’s brief and struck down the new mail voting law as an unconstitutional expansion of the limited classes of voters permitted to vote by absentee ballot under the Delaware Constitution. The Court issued its full opinion on December 16, 2022, agreeing with LDF and finding that the “Vote-by-Mail Statute runs counter to a time-honored understanding shared by our courts, the General Assembly, and the Department, that the General Assembly is not free to limit or enlarge upon the categories of citizens specifically enumerated in [the constitution] who need not vote in person in general elections.”

LDF is proud of this timely victory and applauds the Delaware Supreme Court’s decision to uphold decades of precedent and the rule of law in elections! 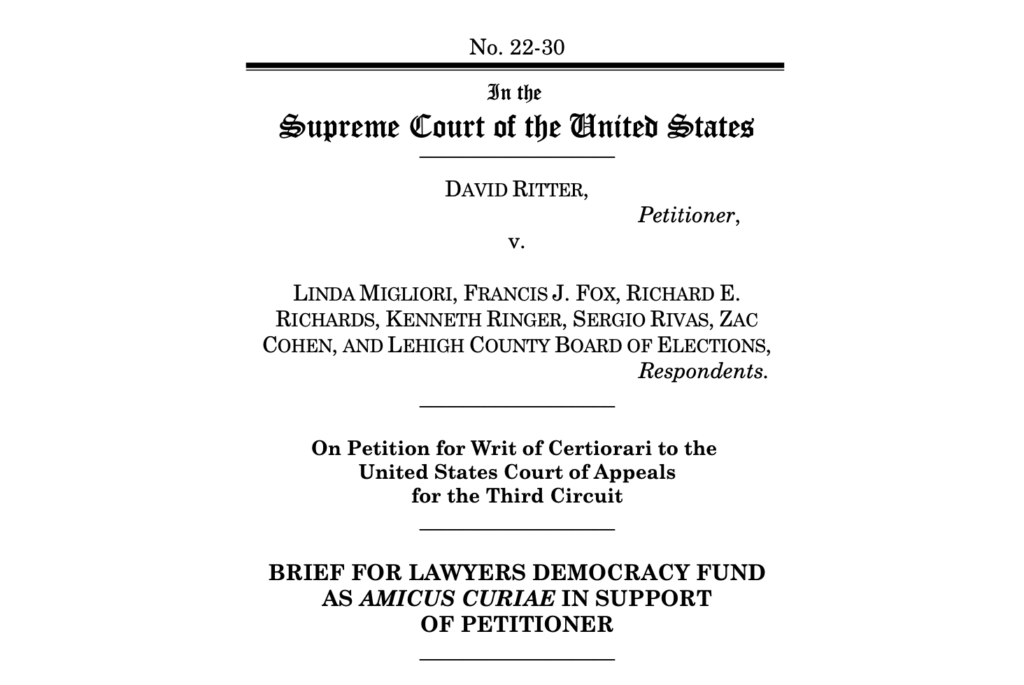 Since its enactment over 50 years ago, the Materiality Provision of the Voting Rights Act has been interpreted to preclude election officials from disqualifying a voter’s registration for immaterial errors, such as minor misspelling errors or for other trivial reasons.

Yet, the Third Circuit recently broke new ground in a novel decision that held the Materiality Provision could be used to preempt commonsense and meaningful ballot qualification requirements, namely Pennsylvania’s requirement that voters include the date on their absentee ballots.

To defend the compelling interests that states have in enforcing reasonable ballot qualification requirements––such as date, signature, and delivery requirements––LDF filed an amicus brief at the United States Supreme Court in Ritter v. Migliori, asking the Court to vacate the Third Circuit’s abhorrent decision.

On October 11, 2022, the Supreme Court agreed with LDF’s amicus brief, granted certiorari, and vacated the Third Circuit’s ruling with instructions to dismiss as moot under the Munsingwear doctrine in a major victory for election integrity!

Below are LDF’s media hits in the latter half of 2022.  To stay up to date on election integrity news, follow Lawyers Democracy Fund (@lawyersdf) on Twitter.     LDF Vice President Tom Spencer was featured in the Carolina Journal for his appearance on the John Locke Foundation’s panel discussing…

Pending before the Delaware Supreme Court is Higgin v. Albence, a case that challenges the Delaware General Assembly’s power under the state constitution to enact universal mail voting without going through the constitutional amendment process. Lawyers Democracy fund filed an amicus curiae brief in Higgin to lay out for the Court…